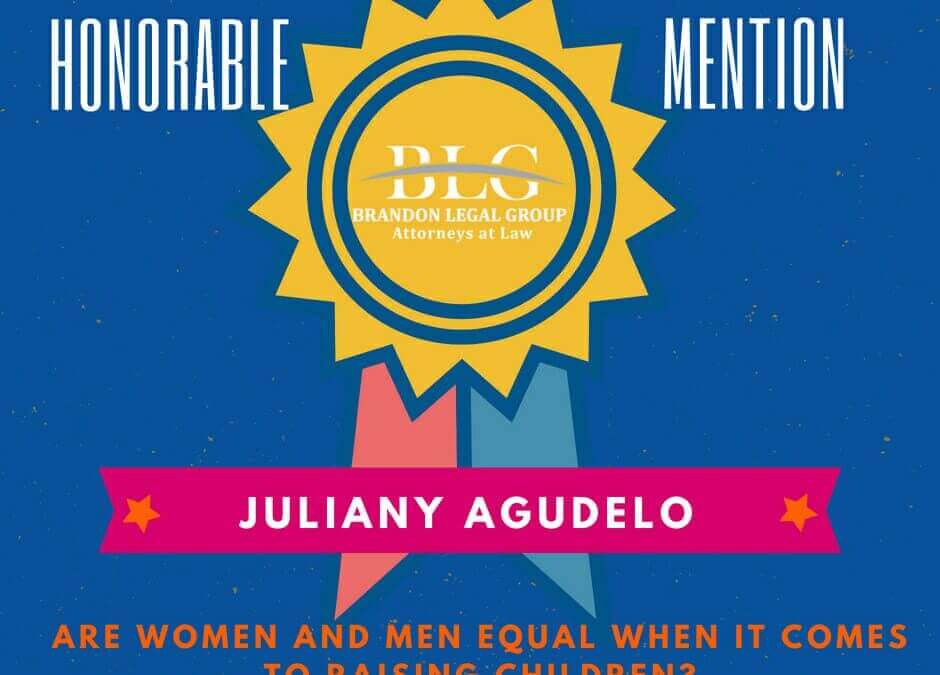 We’d like to acknowledge the contribution of Juliany Agudelo to our Legal Scholarship, an essay competition.  While not the winner, her essay certainly deserved publication in a public forum.

Are men and women really equal when it comes to raising children?

This subject raises lots of controversies. Many people believe that the woman should have more rights than the man to raise a child. This society was taught that the mother would always be there for their child more than the father. In most cases, that is generally true, but there are exceptions.

Mothers may be more negative than fathers. Mothers may have problems with drugs, illnesses, and even abuse their own child. There are some cases where the father will be more loving to their child more than their mother. With all that being said, I still believe that mothers, to a certain extent, have more rights than the father. The mother naturally grows a bonding relationship with their child because the child is the first person that they see. The mother is responsible for more things that the father simply cannot do. For instance, the mother is responsible for feeding their child. They may need to breastfeed the child, which the father cannot do such a task. The mother spends most of her time taking care of the baby, while the father is generally working, providing for the family. In a sense, he is helping out, but the mother is the one that interacts with the child and spends most of the day with.

When custody has to be given to either parent, judges tend to give custody to women more than men just because society automatically thinks that the man is more dangerous to have the child more than the woman. This is not always true. The woman can be more neglecting to their child more than the father. In some cases, the man does play a mother and father role to the children because the mother may not be present in their lives. Although it happens, it is not typical for a mother to be like that rather than a man which has a higher chance of being that.

Another reason why women have more of a responsibility of raising their child is that they are more aware of the child rather than the man. It is generally the woman who wakes up in the middle of the night to comfort the child while they are crying. My mother has told me that she was the main one that took care of me. Although my dad did play some parenting parts with me, he usually was off to work while my mom stayed home and took care of me. It would be wrong for the man and woman do not have an equal share when raising children, but it is generally the woman that is taking care of their child. The man can play some major parenting parts in this, but the woman takes dominance over this. If you look at this subject this way, the mother has been carrying the child in them for 9 months, she ought to have more dominance in taking care of their child than the father.

We encourage all legal students to apply for our legal essay scholarship competition.   Winning comes with a no restriction cash award.  See our scholarship page for details.